Being ‘out’ with a toddler is hard work.

There I said it.

Although I’m already feeling uneasy putting it out there… as it may affect my ability to pull off the ‘I CAN control my child and don’t need large quantities of gin just to get through breakfast’ act I use in public places… but WallyBubba is beginning to test my patience… and pre-9am sobriety.

A simple lunch outing now requires more shitting planning than childbirth. In a former life I planned events attended by hundreds, sometimes thousands, of people, but none – NONE – of those come close to the pain, suffering, stress and alcohol-levels induced by taking my eighteen-month-old out to a bastard civilised lunch with adult-company.

It begins with the timing – this is key to any chance of success. Lunch must be at a time which allows for a sufficient nap, an energy-zapping trip to play-ground, at a point where she’s hungry but entertainable, content but not excitable, when Pisces is entering Sagittarius and the [email protected]*king sun has been eclipsed by a leprechaun riding a unicorn.

The snacks. YOU CAN NEVER HAVE TOO MANY SNACKS. Cheese puffs to bribe her into the highchair… Biscotti to distract her from the CUTLERY OF DEATH on the table… More Biscotti to prize the steak knife she somehow still got hold of from her ear… Rice cakes to prevent her from eating the menu… And the secret weapon AKA individually boxed raisins for the point she begins hurling garlic bread at the pensioners on the next table as mummy begins weeping…

Positioning is everything. Nowhere near the door; if she sees it open, she’ll attempt escape. Not too close to the kitchen door – another potential escape route. And most food will simply never make it… Preferably around a corner, back to the room, no open windows (my daughter is a ‘leaper’). Not in sight of dogs, other babies or small children. No radiators (she is also a ‘licker’). Baby change within striking distance and absolutely no bastard television screens in her eye-line. Unless other diners are prepared to be subjected to two hours of Makka Pakka cleaning Upsy Daisy’s face.

The food… *deep sigh* yes, the food… Remember when you used to eat out, choose your own food and eat it…? WELL NOW YOU HAVE A TODDLER AND NOTHING IS YOURS UNTIL THEY’VE DECIDED THEY DON’T WANT IT. It’s fair to say my daughter likes most foods, but it’s never clear if she will like them ‘today’…. or whether she’ll prefer to wear the rice pudding this afternoon, or perhaps just decide her pesto-pasta looks better shoved up Daddy’s nose or down the front of her nappy… Just order them a bowl of chips and a chocolate sundae, and do away with the pain of another kamakaze-vegetable-suicide amidst a background chorus of tutting garlic-bread-stained pensioners.

Distraction is your ace card. Bring every toy you can carry, including a fully-functioning biro as it’s a ‘special occasion’, and have it brought in on the back of a hat-wearing-labrador. Then, just as the last Pontepine is discarded following a particularly brutal ‘incident’ with the remains of a chocolate sundae… BOOM. Pull out the portable DVD player and Charlie-and-Lola yourself into parental bliss. Silence, calmness and time to etch the biro off the table and remove the sundae from the curtains before anyone even notices…

And yes all of yours will be doubles. 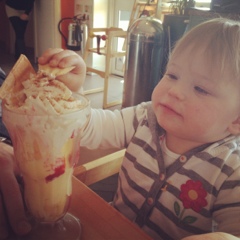