I’m not going to lie – this whole ‘my baby is now over 6-months old’ thing is a little bit shit.

It’s suddenly hit me that I’ve gone from the ‘brand new mum’ with such a teeny, tiny tot people had to stop me in the street to ogle her, to being just another mummy with a chubby pre-walker in a playsuit… Where are the bloody oglers now. Fickle bastards. 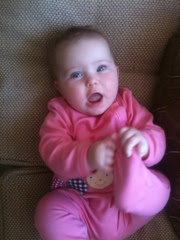 The moment I stopped counting her age in weeks and went to months, I knew it was the beginning of the end. Now she eats stuff, throws stuff, punches, kicks and screams like a banshee… she grabs everything in reaching distance and has a GRIP OF IRON {from which I have a corresponding bald patch at the back of my head}. I can’t believe I ever complained when her entire day’s activity consisted of smiling in between farts.

I have finally got rid of most of her 3-6 month clothing, the majority of which she wore ONCE and is now on its way to clothing an entire African village. The fact that the next size in many shops is 6-12 months only adds to the torment; like someone is saying – well, your baby that only yesterday was considered a ‘newborn’ is now so HUGE you may as well just buy clothes that also fit a one-year-old. No point messing around. Arseholes.

To really rub it in, the new size of nappies no longer say ‘newborn’ on the packet. It’s as if the Pampers God is looking down on me and pointing out that my child is just another chunky-little-almost-toddler. Frankly – you Pampers.

When I place her in her bouncer-chair – it creeks. Very loudly. A bit like the noise when a submarine submerges… which can’t be good… I think it’s bending a bit too. I’m ignoring it.

The play gym which she once was practically engulfed by, she now manages to pick up and swing round her head whilst simultaneously biting chunks out of the hanging fairies which were completely out of her reach just eight weeks ago.

When I put her in her Bumbo, I have to make sure she’s not got a bulging nappy else I might never get her out again. She and the Bumbo actually ‘become one’ if it’s a warm day…

We used to chuck her up in the air and watch as she smiled and giggled with delight, now she does a tummy tuck and punches you in the face on the way back down. If you’re really lucky she also spits in your mouth.

Yesterday she tried to pick one of my cats up by the eye. It was actually impressive.

I suppose the point I’m begrudgingly making is that back when all those patronising folk consistently smirked; ‘they don’t stay this size for long your know’ and ‘make the most of her now, they grow up quicker than you think’, I have to admit – they were right. Patronising bastards.