I’ve become completely obsessed with buggies. I know every make, model, colour and accessory range known to man. I am a human pushchair encyclopaedia.

I spend hours in the evenings searching for toys and clothes online. Fantasy shopping the shit out of eBay and Mamas & Papas. God forbid an actual catalogue arrives in the post; I have developed a page folding/labelling system.

When I find a cheap deal on nappies I issue an email to my mum friends like some kind of twattish nappy-price inspector.

At least 70% of my Facebook statuses start with ‘gin’ or ‘teething’. I’m fairly sure I’ve been unfriended by around 35 people since I had the baby… Arseholes.

I am obsessed with taking photos of the baby. Usually around 20 a day. My baby photo albums are broken down by week not month… Even the grandparents start to look bored after 45 minutes of JULY – WEEK 3.

I’ve developed a baby voice. I promised myself I wouldn’t but it’s there. Squeaking its way through afternoons playing with stacking cups and sporadically breaking into song. It’s like being possessed… By a complete twat.

Worst of all, and most worrying of all, I can’t stop talking about having another baby. What is wrong with me? I swear someone is injecting me with mind altering drugs.

All of the above could be swiftly corrected if I just went and got a job. But considering my CV now basically says: 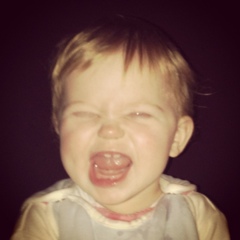