Is it normal to be slightly scared of your own child?

I mean, is it ‘ok’ for me to admit that when she gets a certain look in her eye I begin to feel just a little bit terrified and mildly consumed with dread…?

Over the last few weeks, WallyBubba appears to have developed a temper which could rival even the moodiest, ASBO-baring teenager… She pulls diva fits the likes of Elton John would be proud of. She’d leave Mariah Carey shitting herself… I’ve ruled out puberty given shes still under 12 months old, but I can’t quite understand why she feels the need to express herself so ‘vibrantly’.

Almost anything can bring on one of her ‘episodes’… If I don’t put the next spoonful of porridge in her mouth quick enough she will pound her fists on the highchair tray before punching me in the throat with a toast soldier.

Any attempt to put her down before she’s ready will result in her creating a handle in each fist; one from your hair, the other from the skin on your neck. The more you struggle, the more permanent skin damage you suffer.

If my cats run away from her, all HELL will break loose. And if I do bring one of them over to her for a gentle stroke, she looks me straight in the eye and attempts to ‘chinese-burn’ the fur off of its tail, as I frantically attempt to break up the assault.

Both her aim and range are impressive; I’ve had three Nuby-no-spills to the face after failed attempts to provide her milk in a sippy-cup instead of her bottle… Looking back this was both brave and exceptionally foolish.

Incy-wincy spider will end when SHE decides. And you’d better make the actions bloody enthusiastic. She needs to BELIEVE that rain came down. Else you will be receiving a stinky little gift through a covert opening in her nappy… a move the WallyHusband and I now refer to as the ‘Wally Side-winder’.

Thought she was looking tired, in need of a nap or an early night perhaps? Thought she might like to play with a maraca rather than £10 note she’s removed from your wallet and half eaten? Well you were WRONG. In fact, any attempt to remove an item from her grip (of iron), or make her do something against her will (of iron) results in what we call the ‘WallyBubba-Worm’. Body rigid, dramatic drop to the floor, arms and legs thrashing violently while screaming face down into carpet and occasionally glancing over to check everyone is watching… Makes me so happy I ruined my vagina for her.

And lastly, GOD FORBID you don’t answer the green plastic phone from her walker quick enough… you better be answering that little bastard in three seconds flat else she will hunt you down in the night and [email protected]*king cut you. 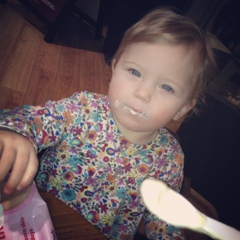