Why won’t she eat bastard anything…?
She used to love chomping all night.
Now it’s a battle just to get near her face,
With anything that won’t end in a fight.

Why won’t WallyBubba eat anything…?
I’m so bored of watching her pick.
And chuck on the floor, what I’ve been slaving for,
And look at me like it’s a trick.

Why won’t my daughter eat anything…?
I’ve tried everything that I know.
Veggie bakes, dippy things, pies baked with love…
But if it’s not made of chocolate, it’s ‘NO.’

Why won’t my child bloody eat anything…?
Humans can’t survive on yoghurt alone.
I can’t leave the house without a whole bunch of munch,
Once the cheesy puffs are finished we go home.

Why won’t she go back to eating anything…?
When she just shoved everything in.
Now it’s teatime warfare, that for mummy is not fair,
So thank [email protected]*k for petit filous and gin. 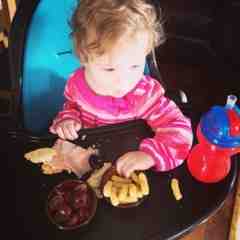