Today was a dark day. Darker even than the day Mummy realised she could get my hair into bunches… I’d go as far to say it was the darkest so far…

The setting was a giant ‘shop-ping-cen-tre’; a sort of never-ending multi-levelled Mummy playground which makes them go a bit mental and say ‘ooooh’ and ‘aaahhh’ a lot… Weird.

The activity: something called ‘shop-ping’. Something which can make even the most competent of Mummies change into some kind of rampant, dribbling shoe-hunting animal, armed with a joint account card.

BE WARNED, shopping is no joke and if you are taken on one of these ‘hell trips’ there are certain things can do in order to get through it:

Firstly. Upon arrival insist on running everywhere and trying on all the shoes. Even the ones people are wearing. If necessary use ‘the stare’.
The handbags are there to keep you entertained. Use your time wisely. Wear them all. Lick them all. Or simply roll in them… it’s your choice.
Ride the shop assistants like horses. If they don’t do the clippy-clop noises have them whipped.
Insist on a constant supply of crisps and hide some inside the aforementioned shoes as presents for the next toddlers. Lucky bastards.
Mummies will try lots of clothes on, and typically Mummies at this age will try to dress for the figure they had before pregnancy, not the flobbley one they have now… it’s a common problem. Best thing to do is not stare, and subtly drop the word spanx into the conversation.
VERY IMPORTANT. At any point you spot a children’s ride, run at full speed towards it and drive the shit out of it for five minutes straight until your arms ache.
If you spot any cuddly toys*, get them into a level three power hug so you never have to put them down. EVER. (*also applies to dogs) (*and the elderly)
Ensure Mummy has ginned up the sippy cups. She’s going to need it if she wants to convince herself she’s ready for skinny jeans.
You know she’ll never wear them she knows she’ll never wear them, but let her buy the damn shoes and enjoy the chocolate bribery that comes with not laughing.
At the point you simply can’t take it any more, simply strip and remove your nappy, and head for the lift. Boom. Sorted. 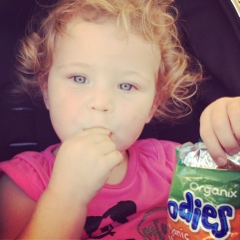