Notes: Generally occurs at home. Manageable without skin loss. (Yours)

Warnings Signs/Traits: Protruding bottom lip, mild stroppiness and an inability to make full eye contact or respond to own name. Occasional throwing of nearby objects and mild violence towards nearby animals/woodland creatures.

General Causes: Saying no to a 75th episode of Peppa Pig, suggesting something other than fish fingers for dinner, pointing out that a spoon really is more effective for eating yoghurt than a palm/face combo or recommending that due to the torrential rain perhaps today is not the day for naked paddling pool fun.

Treatment: Usually appeasable with biscuits, grapes and a 75th episode of Peppa Pig.

Notes: Will nearly always occur in public. With Tutting. And eye-rolling.

Warning Signs/Traits: Sudden screaming followed by spurts of laugh-crying (If you have a toddler you know what this is…). Refusal to get into the car/shop/ trolley/house – in fact refusal to be compliant in any way as long as it massively inconveniences you and causes more tuts.

General Causes: You looked at them wrong, you didn’t use your nice voice, you forgot to pack an apple despite very specific requests, you made them wear a hat and three days ago you realised you’d run out of yoghurts and provided a ‘mashed up banana’ in its place. This is simply not acceptable.

Treatment: You’re gonna need some serious treats, a Peppa Pig DVD, the stamina for at least a 2-hour angry-princess-tea-party and you will be required to set fire to all hats. ALL OF THEM. (You’ll need gin for this.)

Warning Signs/Traits: This is what happens when you attempt to bring a toddler out of a Body-Flop using a lifting or bending motion. No matter how much you try to manipulate them into a lift-able state they WILL resist… like soaped-up slippery ninja midgets sent to break your will power. And make you look like a wanker.

General Causes: They’ve been planning this for days…

Treatment: This is a battle of wills. Never break first. You must stay strong, silent and in control…. Safe in the knowledge that tomorrow you are upping their nursery hours.

Notes: Hide all pets and breakable objects. Do not allow them near other children of similar size or smaller.

Warning Signs/Traits: Level 4s are fairly rare but if they do happen it will be in a confined environment for maximum effect. Such an an aeroplane, a restaurant, the queue at the post office.

General Causes: You took them on an aeroplane. Or to a restaurant. Or to the post office. How could you be so misguided as to think they would enjoy a holiday, or eating, or receiving gifts via post… You are so [email protected]*king selfish.

Treatment: There’s nothing for it but CRiP…. Capture, Restraint and iPad. Use every trick in your change bag. There’s no such thing as too many crisps. Or too big an ice cream.

Warning Signs/Traits: There are none. That’s what’s so terrifying… They don’t react… they remain silent… biding their time… harvesting your weaknesses… waiting for their moment to strike…. You should be very afraid.

General Causes: [email protected]*k knows… But you’re on your own now…

Treatment: Sleep with one eye open and a knife under your pillow… thoroughly expect to woken up by your toddler holding said knife in one hand and one of your freshly severed organs in the other… 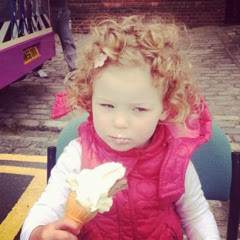