The Wally-Bubba has, quite amazingly, reached eight months old and survived nearly 3/4 of her first year on this earth.

And I haven’t broken her, lost her or had to swap her on the black market for another baby because I’ve messed her up too much… (or have I…) (no, I haven’t) (or…) (that’s enough of that) SO FIRSTLY – a round of frigging applause for me and my clearly exceptional parenting skills please.

Oh yeah and my husband – he helped a bit or something or whatever.

SECONDLY – she is completely in tact; no parts missing, no major dents or defects and just the one careful owner from new, so all in all I’m claiming this as a clear victory in the parenting game. Go me.

That said, I feel it only fair to share with you my slight concern that my daughter is not quite right in the head…

All her little baby friends sit and play nicely, attempt a bit of a crawl or shuffle and smile inquisitively at toys and people. My child lays on her back with all four limbs stuck in the air, rigid at 90 degrees to her body and then begins squawking like a baby pterodactyl (Like in Jurassic Park – you know the third one with the giant birdcage thingy. Just like that. That was pretty much a documentary right? Docu-drama then… like The Hills? Anyway.) After the squawk comes a few moments of tense silence before… BOOM… it’s like a baby activation switch has been flipped and she flies into a floor rage, thrashing like one of those plastic wind up terrapins but on crack – except she doesn’t actually move in any direction she just beats the floor with her arms and legs like a beached epileptic. It is quite a spectacle and a sight to be marvelled at I tell you….

Not only this, she also seeks out and then sucks on my left big toe – but only when my toe-nails are painted (of course), licks the carpet, eats baby-wipes, covers her ears with her hands when I speak to her (rude), sings to her feet, chews her buggy, waves at the cats (but no-one else), will not sit down for hours on end – has to stand bolt upright; regardless of how inconvenient it is, laughs at my nipples, shouts at her bath-toys, full-on-punches her bottle the entire time I’m trying to put it in her mouth, stares directly at the monitor camera in silence for at least half an hour (sometimes without blinking) before falling asleep at night and ignores all toys in favour of her baby-wipes packet and/or the nearest receipt.

Sod it. I don’t care that she’s weird – because she’s mine. And I made her with my fanny. 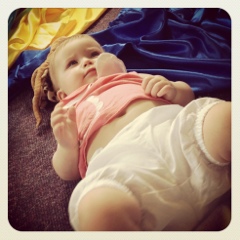