Given the amazing response to the previous Bank Holiday Baby Quiz, it seemed only appropriate we have a follow up for the last bank holiday of the English summer (Yes I know, what frigging summer etc etc). 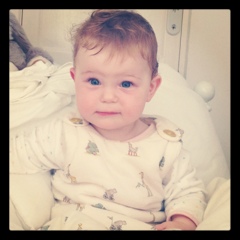 As before, simply answer on behalf of your babies and you will once again receive what can only be described as an intriguingly insightful and probably professionally-recognised psychological analysis of your child’s behaviour – TOTALLY NOT MADE UP IN MY BIZARRE & BABY-FRAZZLED MIND. Honest.

Today you saw another baby doing this weird thing with it’s body… instead of lying down, it pushed it bum in the air and moved it legs alternatively to propel itself forward – how should you react?

Clearly this was a magic baby. Ignore it and concentrate on sucking your fist.
I already know how to do that but where’s the fun in letting Mummy and Daddy know? I’m waiting until we go on holiday next week then BOOM – I am crawling my arse all up in their shit.
Study his moves from afar – when the world is mine, this skill could be useful and a skilled soldier such as this will be a true asset.
I just like cuddles with Mummy. Why would I want to move anywhere?

Mummy doesn’t give you much of that milk stuff these days – instead she places you in this weird chair thing and puts little colourful smelly things she calls ‘food’ in front of you – what should you do?

Throw everything at daddy’s face – he keeps laughing so he clearly likes it.
Place arms out directly in front of you and pull back in a ‘breaststroke’ style sweeping motion. Each time you do this mummy will go and bring more, but persevere as she’ll soon get bored.
Nothing. Don’t even look at the ‘food’. No matter how many time she picks it up and chews on it making a ‘nom-nom’ noise. Don’t make eye contact with her, purse lips and breath through left nostril – she’s clearly an enemy agent sent to test you. You must remain strong.
Whatever Mummy gives me is the best. She’s the best. And I can get the little green ones up my nose. Which is the best.

Mummy and Daddy announce they are going away for their ‘An-vers-ree’ (whatever that is), and that you are not allowed to come. They have hired a babysitter – how should you deal with this situation?

Just hide Mummy’s wine – she can’t do anything without that. It’s her kryptonite.
Luckily I’ve been storing up a very special turd for when a situation such as this arises… just a they’re about to leave I will ‘Unleash the Cracken’.
This babysitter you speak of could be of some use to me. I have little chance to build fresh alliances stuck with Mummy all day… I shall allow her in and recruit her to my cause.
Daddy is the best. I love Daddy. And Mummy. And Carpet.

Mummy says having you has made her brain go a bit mushy – what do you think about this?

Daddy says her brain was mushy before.
Hire a baby-stunt-double and take it in turns to hide behind doors and ‘appear’ in new rooms – eventually she’ll crack completely.
Why would I do anything… It’s all part of the plan… the mind control drugs will slowly build up in her system and by the time I’m 3 years old there’ll be nothing I can’t achieve.
Mummy is really pretty and her face is my total favouritest ever.

Daddy says him and Mummy are replacing your old car-seat with one that’s for big babies – what do you do?

Eat the old one. If it’s part of me it can never leave…
Eat the new one. And all my bibs – F*@king hate bibs.
When the world is mine I shall burn it first, along with Daddy’s nine remaining hairs.
Daddy only gets me bestest nice things. His face is a bit smelly though.

All day long all Mummy ever says is ‘MA-MA’ over and over again – what do you think this means?

I know what it means, I just don’t want her to know that I know what it means. I’m giving it another week and then I’m going to start calling her ‘DA-DA’. That should shut the bitch up.
I just let her get on with it – repetition is good for her. Next week I’m teaching her how to use a spoon properly by continually closing my mouth and turning my head every time she gets near with it. It’s a long process but she’ll get there eventually… *tuts*
When the world is mine I shall punish her by repeatedly shouting my NAME IN HER FACE FIFTY TIMES A DAY. And see how she bloody-well likes it.
Mummy’s mouth is the same shape as a banana. I love banana.

Mostly 1s:
You have learnt much little one. There is hope for you. Stay strong.

Mostly 2s:
Your parent training skills are quite exemplary. Before long you will have them sleeping through, eating alone and toilet trained.

Mostly 3s:
You probably need to reign things in a bit. We’re a bit concerned… For humanity…

Mostly 4s:
You have learnt nothing. You are truly lost to us.