As you are all probably aware there’s a bank holiday coming up this weekend, which means you have an extra day with which to entertain your parents. And we all know they can get a bit annoying and overexcited when there’s a three day weekend.
Firstly – don’t panic. I’m a pro at these now and if you follow my simple ten step bank holiday guide (patent pending) you’ll get through it like a breeze and Tuesday will be here again before you can say ‘thank shit for that’.

Let them have an afternoon nap to keep their energy up. You don’t want them playing up, and showing you up in front of other local toddlers.
Daddy has suggested a ‘Bar-Bee-Cue'(whatever that is)… let this go ahead but insist on being naked throughout and only eating crisps. It’ll keep them both entertained for a few hours so you’re free to see what snails taste like and shit in the paddling pool.
If they start tantruming, bring them inside and let them have control of the TV remote for a while, and give them each a biscuit. Works every time.
If you’re planning a day out, let them think ‘they’ve’ picked where you’re going so there’s no arguing once you get there… I find sticking Peppa Pig World flyers to the cats in the days leading up to the weekend is a subtle yet effective method, but do whatever works for you…
Let them choose which outfits they want to wear so they feel like they’ve contributed. Obviously screen what Daddy wears before leaving; we all remember the day he wore flipflops with jeans…
Don’t leave home without the iPad incase they get bored over lunch. Have a few episodes of their favourite programmes downloaded so they don’t keep getting up between courses and things. You know what they’re like with pretending they need the loo while you’re out… *tuts*
Pack some gin for Mummy. Don’t use it too often incase she falls asleep, but a few doses throughout the day and a big one before bed will keep her calm and make sure she sleeps through.
A few toys for Daddy will help make the day go smoothly too; an empty box of matches, part of a toy train, a few receipts… any old crap will do really, so long as he thinks it’s ‘his’. Bless him.
Don’t forget parents get overtired easily and will have probably run themselves ragged by Sunday night, so its best to organise a pyjama day for the Monday. Sky Plus a few Peppa Pigs and order a pizza in as a treat for them.
Finally and most importantly, insist on holding hands wherever you go, especially near roads and other, bigger Mummies and Daddies. They might be old but they’re quicker than you think! 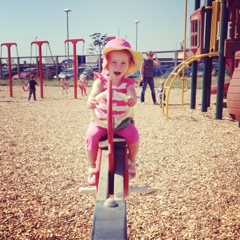