My child turns 10 months old today. And to celebrate* she has cut her first tooth, and decided to completely alter every bit of her ‘ordinary’ behaviour… just to make me look like an idiot who has no clue what I’m doing. (again)

*when I say celebrate what I actually mean is scream until she pukes or shits, or both… but let’s not split hairs eh?! 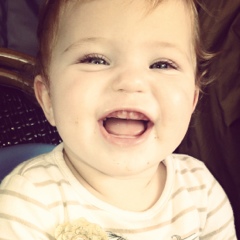 She seems to have suddenly aged almost over night. All remanence of the helpless little newborn I once produced has well and truly disappeared, and what is left is one tough, feisty little bastard with some serious manipulation skills and an awesome sense of humour.

Shit… I think she’s actually turning into… me…

She crawls at the speed of light from one end of my living room to the other; ripping everything from head-height and below from its previous location. She hurls herself up my dining room step using her own face for leverage before rearranging my kitchen cupboards, feasting on any remaining kitty food and racing the cats to the cat-flap. So far they’ve out-run her but I fear it won’t be long… I’m not sure quite how to break it to them… Their only chance of survival is high ground.

To add insult to injury we’ve had to completely do away with her newborn carseat as she not only didn’t ‘fit’ it any longer, but had actually started to eat parts of it, and had worked out how to pick the lock using a BickiePeg…

The jumperoo has been officially dismantled, (by a team of professionals via scaffolding of course) and packed away for the supposed ‘next baby’. A thought which sends shivers down my spine but simultaneously I’m keen to ‘get out of the way’ as soon as possible… I’ve even ordered a new buggy so that I’m ready for the death penalty, I mean second child, so that I can convert to a tandem as soon as it arrives. What the hell is wrong with me??

She also barely fits in her baby bath and spends most her time stood up trying to detach the taps and lasso the shower-attachment round her head, or one of my cats.

She ignores virtually all her newborn toys, favouring only the Argos catalogue and a couple of yoghurt pots complete with WallyBubba bite marks for identification purposes (Obviously)

She doesn’t want to be spoon-fed anything. When I try to lovingly feed her, she rips the spoon from my hand and fires it at my eye. Giving me the ‘MUM GET THE HELL UP OUT OF MY SHIT’ glance. And with that she smashes broccoli up her nose and wipes fish pie across the wall. 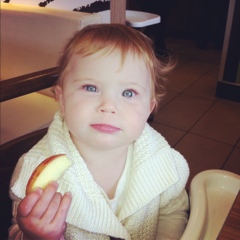 She won’t drink out of a sippy cup, she will ONLY drink from my glass. Considering my glass is usually filled with wine or a stiff G&T with ice-and-a-slice, this isn’t the best and does tend to get a few looks as I spend most lunch outings attempting to prize my Rose from my daughter’s vice like grip.

Her hair has begun to curl which just makes her look like a teenager (slight exaggeration) and I’ve found that most 12-18 month clothes are in a different section to the the earlier sizes. So like some withering weirdo, I head to the newborn section in BabyGAP, pick up and coo over everything sometimes shedding a few tears… then head over to the shitty toddler bit and swear as everything I pick up comes in sizes that also fit five year olds. Screw you 1-2T… She IS still a baby. SHE IS. OK.

There’s no leaving the buggy straps undone for a second as I grab her blanket or attempt the impossible operation known as ‘project footmuff’… Any moment left unsecured results in a dramatic and instantaneous leap for freedom. Any kind of restriction whilst stationery WILL result in a screaming fit and any attempt to wipe face will result in TOTAL MELTDOWN.

I suppose the point I’m making is that every time I think I’m comfortable with what I’m doing it all changes… And I’ve got a funny feeling it’s going to be that way for the rest of her life. Or until she’s 16 and I chuck her out to fend for herself and bugger off to Bali. I know some of your think I’m joking about that last bit but I’m seriously not… 🙂