No talking over the teacher.
No food or drink to be consumed in the session.
No alcohol.
That includes drinking gin at the back. (Darn it)
Don’t steal toys. Let the babies do it for you.
Always pay attention to your own child. But remember to allow enough time to judge the others…
Don’t snatch toys off other children to give to your child ‘just to shut them up’.
No pointing and staring at the lone dad. He’s already scared enough… He flinches every time someone says the word vagina.
Don’t laugh hysterically when you’re asked to wear a name badge and answer when they call the register… they’re not actually joking.
Try not to look terrified by the teacher. There are two varieties: the type who don’t blink and are permanently hooked up to a helium drip, and the sort who want to hurry things along to get to the pub for happy hour and have been drafted in against their will on some kind of community service.
Only change your child’s nappy during the class if you are certain of ‘turd-containment’.
Don’t laugh and point when babies you don’t know faceplant inanimate objects.
Don’t change the words of the songs to swear words (or do… but do it very quietly)
Don’t allow your child to physically beat another child with a maraca. I learnt that one the hard way…
Don’t be jealous of the mums with the newborn babies who simply lie still for the entire hour… while your child impales themselves on a rainstick, bites another baby in the eye and leaves a six inch snot trail down the teacher’s arm. They’ll be there soon, they don’t know it, BUT THEY WILL. *evil laugh*
Deal politely with boisterous children by tripping them up when their mums aren’t looking.
Always be friendly and welcoming to other parents. Then arrange to have coffee with your mum friends directly afterwards to laugh at the chavvy ones and their ugly fugly babies.
Let your baby run the living shit out of itself. The more they run around now, the more they’ll sleep later. FACT.
Wait until you get home to cry.
Be drunk* 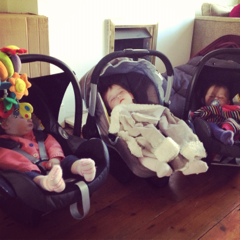