Wally Mummy November 18, 2012 Blog Post 30 Comments
What has happened to bedtime…?
When did the switch happen…? 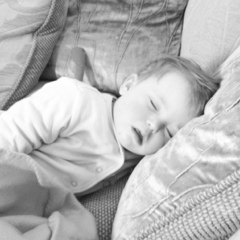 By day she might be my WallyBubba, but by night… she has become a tiny, angry, turd-encrusted ninja.

It begins at dinnertime… I lovingly prepare her tea while she stands legs apart, head back, screaming at the ceiling whilst dragging her sippy cup across the the stair gate bars like some kind of prisoner on death row demanding their last meal.

Now the battle into the highchair. My husband stands behind me performing a frantic puppet show over my left shoulder as I attempt to collapse the amazing unbendable baby into a right angle. Apparently known by others as the seated position.

She grabs a fistful of food in each hand and inspects each one carefully, then begins glaring at me with her ‘What the f•@k do you mean I’m having cheese on toast again you unimaginative hussy’ eyes. Releasing a harrowing battle cry, she crushes each fistful into pulp (whilst maintaining eye contact of course), then simply lets the rubble fall from her grip onto the floor…

Then. Yoghurt. (now a banned substance in our house) She sucks me in by allowing me to spoon-feed her the first half a pot without so much as a peep… and then… once she’s satisfied I’ve relaxed… She grabs the spoon with one hand, the pot with the other and releases a spurt* of yoghurt with impressive trajectory across my face, one of the cats and the NinkyNonk.

*she had been ‘hamster-storing’ a good 4 or 5 mouthfuls in her cheeks for maximum effect.

We abandon dinner at this point and head for a nice ‘calm and relaxing’ bath. CALM AND RELAXING?! Are you shitting me? The first bath removes the molten turd from her ankle to neck area, the second bath is where my child uses the tub as a human skate-ramp whilst eating entire sponges and water boarding Peppa Pig.

Trust me when I say removing her from the bath is a minimum three person job. The least said about it the better… Cuddledry my tits.

The changing table has become completely obsolete. It’s pointless attempting a re-clothing in an area less than 3 metres square. Every item in reaching distance is used to distract her into her sleepsuit* and Grobag over a period of half an hour. (Breaks are taken at regular intervals to rest and/or cry.)

*Note to self: Write to all major baby clothing manufacturers to ask for address of person who decided to put poppers on sleepsuits. Once obtained; hunt down and set on fire.

Finally the bottle… the instant coma-inducing liquid sleep which gently soothes WallyBubba into a slumber within 3 minutes flat… until… she gets within one inch of the cot mattress then BANG! The never-sleeping ninja strikes again… How ridiculous of me to think that an entire day of non-stop physical and mental exhaustion would actually result in sleep?!?!

So I slope downstairs and watch the ‘show’ unfold on the monitor with the sound off, a glass of red in hand (and the rest of the bottle in the other) with In the Night Garden playing out… and do you know what… that little bastard Iggle Piggle still isn’t in bed…