Why do toddlers refuse to sleep?

Why do they act as if nap-time is like some kind of bizarre punishment for having too much fun, and MUST BE AVOIDED AT ALL COSTS ON PAIN OF DEATH. I mean, I would literally chop off a limb for an afternoon nap most days, and happily cut out and hand over my own uterus in exchange for a lie-in…

But in a toddler’s brain, sleeping could mean missing out on something completely amazing… like posting porridge into the DVD player… or eating that dubious rice-cake found beneath the sofa… and Mummy’s car keys aren’t going to post themselves out of the catflap now are they? The CDs aren’t going to unpack themselves from their cases and the cats aren’t going to chase the shit out of themselves screaming MOW MOW MOW DEAD. No – there’s serious shit to be done around here clearly. Silly Mummy; how completely twatty of me not to realise…

WallyBubba has now decided the ONLY way she will have an afternoon nap is in the buggy. I say she’s decided, what I mean is there’s still resistance but it’s muffled by the rain cover of doom and only lasts around 10 minutes in carefully selected back streets… So I say fine. A stroll with the buggy it is. Knowing all will go silent for 2 hours after the initial burst of protest… then Mummy will get to just sit, rocking, gently into her gin… waiting for the cats to shit themselves again. 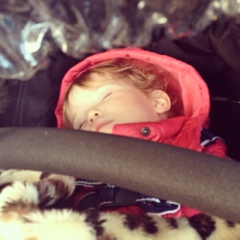