I’m gonna get all philosophical on you now.

I’ve just been at the gin and decided to jump on my metaphorical-bloggy-mummy-soap-box again. And that’s basically the same thing… You know you love it… *wink* (well, squinty-gin-wink.)

It’s struck me that parenthood is essentially a massive never-ending cycle of firsts. And lasts. With guilt and alcohol chucked in for good measure… I mean that’s basically it right…?
The first smile, the first step, the first mouthful… the first time they say ‘Oh Cocking Shitbags’ back to you in context… Ahhh, the memories…
But then there’s the lasts… the last time they crawl, the last time they allow you to hold the spoon for them without it resulting in GBH, the last time they sleep in a cot, wear a nappy, punch an unsuspecting rabbit… I miss those moments…

I know we are now over the majority of WallyBubba’s firsts as a baby (*sobs*), and I feel like there’s been too many lasts that I haven’t paid enough attention to… When did she stop falling asleep on my shoulder, chewing her fist, playing with her Sophie the Giraffe and EATING ACTUAL VEGETABLES without me hiding them in omelettes…? I don’t know. I just know those things don’t happen any longer. And I’m really [email protected]*king bored of cooking secret-pea-omelettes.

And what happened to all the muslin cloths… I can’t remember the day I stopped using them. I have approximately 4,000 in various colours, sizes and levels of crustiness, packed away somewhere… I think I miss those crusty muslins. I do. MY NAME IS WALLYMUMMY AND I MISS CRUSTY MUSLINS. Oh the shame… *lifts palm to forehead dramatically…*

I find it so depressing that I’ve been ejected from the Baby section at Baby GAP and I’m now only allowed to shop in the Girls section… All her new winter clothes are aged 2-3. Two-to-shitting-three. In my head she’s still a baby baby. Not a ‘might as well be three-year-old-child’ baby.

Her hair goes up. She won’t hold my hand. She chooses her own clothes and shoes. She barely uses her buggy. She will only drink from a bastard Hello Kitty mug… She’s moved on… but have I? I’m not so sure… I’m still in leggings touching up mascara I think I began applying three days ago…

It doesn’t help that my facebook timeline is shitting plethora of pregnancy announcements, scan pictures and newborn faces than even I struggle to drink through… I’m JEALOUS. I want my baby to be tiny and wrinkly and so cute you almost eat her actual face again…

It just goes too fast, and I’ve been too bastard-well exhausted to pay attention properly. Besides, her calling a pensioner a ‘Cocking Shitbag’ in the queue for the postoffice the other day is enough to make up for all of it entirely anyway… *snorts* 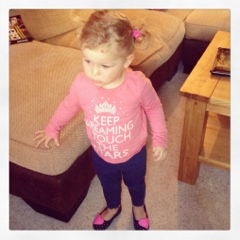