Tinsel makes then angry.
The flashy lights confuse them… there’ll be much staring… then tears… then violence.
The pine smell makes them sad; masks their farts.
Pine Needles: tiny death spikes which your toddler will eat, stick in their eyes and hide in their clothing until later to stab babies with.
Baubles: like a red rag to a shitty little bull… a sparkly apple of delight just waiting to be bitten into… Then blood. Then tutting. Then A&E. Again.
Presents: Remember when you spent most of December beautifully wrapping, meticulously ribboning and carefully organising them under the tree…? Well, the toddler thinks they look better unwrapped and posted out of the cat flap with a turd on top.
Shit. They’ve just realised not ALL the presents are for them… cue STAGE FOUR FESTIVE TODDLER MELTDOWN.
The point where they work out the gold coins are actually chocolate is the point they will quite probably hyperventilate themselves into a coma. BEST. [email protected]*KING. DAY. OF. THEIR. LIVES. EVER.
They will sacrifice both cats, a lamp, and the entire ornamental nativity set, including BABY JESUS HIMSELF, to scale that tree and get that bastard star down. FACT.
Not tree related, but my vagina releases humans so I win Christmas anyway. *sticks middle finger up* 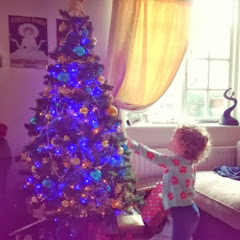