*Entering the home straight… darker, cakier times*
It’s day 175 and I’ve begun eating cake before 10am… And by 10am, I mean continuously. With no hands. And just my face. (and by cake I mean left over pizza and/or chocolate…)
The toddler isn’t being helpful. Mostly, she’s ‘blacking up’ with Weetabix and sneaking up on our cats with glitter glue while I cry into a chocolate twist dreaming of thin-ier, gin-ier times…
Yes. It’s fair to say things are beginning to go downhill.

After the short-lived joys of the second trimester (my nails grew a bit and I could walk without looking like a foetus was about to fall out of my vagina at any second) I’m now entering the glamorous world of bacne, pubic/leg hair I could French Plait from my belly button to my ankle, and my husband only wanting to have sex with me with the lights dimmed and one eye open sort of squinting in another direction… That’s right folks. I’ve almost hit the third trimester.

The interesting thing about a second pregnancy is that other than your direct family and a few select friends you emotionally blackmail and give cake to, NO-ONE GIVES A SHIT. Your friends stop calling, the Facebook likes for your posts about cankles and tingly finger tips have wilted into obscurity and Instagram does not have any love for your restless leg syndrome… So what if your uterus is releasing another human being, social media simply does not give a [email protected]*k second time around while there are videos of cats and ice-bucket-challenges to look at.
It also doesn’t help that instead of doing pilates, eating bulgar wheat and keeping on top of the housework as I promised myself I would second time around, I’ve been ordering pizza, occasionally rolling to the kitchen to get more ice-cream/another pie, and occasionally tipping bleach down a toilet… On the plus side, the toddler has become completely independent and now knows how to operate the DVD player, flush the toilet and order her own personal cheese pizza through the Dominos app on the iPad… #winning… Sadly she’s also taken to shitting underneath the dining room table and prodding it with a Barbie, but you can’t have everything can you…

My second pregnancy and all its joys so far. It’s not been beautiful, I have picked up a lot of pre-dinner toddler logs and for anyone who was thinking of asking, YES I’M [email protected]*KING SURE IT’S NOT TWINS BUT THANK YOU FOR THAT SENSITIVE AND HIGHLY ORIGINAL COMMENT.

*clears throat and regains composure while eating another Twix*

Yep. I’m just going to have to face it; it’s just me, my dodgy pelvic floor and mid morning cake-pizza now. 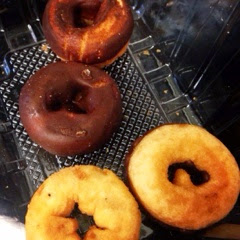