It’s official. I love the taste of infant faeces so much I’ve decided I want it flung at my general face area daily for the near and foreseeable future. That’s right. Hold the shitting front page; I have made the decision to become a Stay-At-Home-Mum.

I never thought I would, so it has been a conflicted decision for me. I kept telling myself I was letting myself down by not returning to work, and then that I’d be letting her (and Sophie the Giraffe and the tombliboos) down if I did… Was so much fun having yet another thing to keep me up at night along with the teething, constant colds and lack of a functioning pelvic floor muscle…
If you’ve followed this blog from the beginning or are one of the lucky few who actually knows the WallyBubba personally you’ll know she is more than enough for one person to deal with on a daily basis, so I’m not expecting to be bored, stumped for conversation or sit down at any point… Clearly as I loved childbirth so much the first time around I’d quite like to that again reasonably soon too. Sod it, might even do it again twice. If my husband doesn’t have me secretly sterilised by imps in the night that is…
I actually found it was other people who had the biggest problem with me becoming a SAHM. So for anyone else who’s encountering the same treatment I’ve compiled a set of less conventional responses which I’ve found generally hush the haters:
I am now officially acronymed up. I might even put SAHM on my twitter profile later today… that’s when you know I really #meanit.
#SAHGM
#StayAtHomeGinMummy 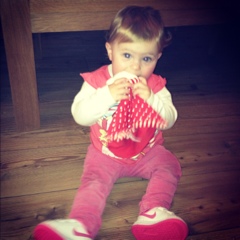