Finally my closest friends have begun to produce babies.

It might sound self-centred (And it is. Not that that’s ever bothered me before…) but I’m so happy to no longer be the only one being sucked dry by a tiny person.

Mummy friends are totally awesome, but somehow nothing compares to finally having one of your really good friends KNOW YOUR PAIN. An ally. A new recruit. One who’ll never judge your gin consumption, laughs in all the right places and shares in the not-so-subtle eye-rolling when child-less friends say they’ve had a shit week. A week doesn’t even begin to be shit until you’ve spent several hours releasing a human-being from your vagina. Trust me.

Instead of the polite passing round of the tot over tea and a superficial conversation about how lovely and ‘fine’ everything is, there is the graphic re-hash of the birth stories and tales of nipple cracking over shots of gin-laced squash and hobnobs.

The act is dropped. Look what we’ve both done to ourselves. What the [email protected]*k. Seriously WHAT THE [email protected]*K. But you know, that she knows, that we know, we’re like frigging super humans, just with mis-firing bladders, slightly crusty clothing and lonely hair straighteners.

You loved her enough just for holding your hair back after all those nights you attempted to get more red wine in your bloodstream than actual blood (hoping the colour match would trick your system, etc etc…) now that love has moved to utter respect. You’ve both done it… Made it… Got it… Knowing you’d both drop to your knees in adoration of any woman who’d managed a three day labour on gas and air alone… build her a shrine and co-sacrifice a goat in her honour.

She’s the first of your closest buddies who can remain talking as your child punches you in the face, head butts a door and has a full-body tantrum over a mis-placed piece of toast. And you know the exact amount of time to leave before telling her she’s got a milky-snot trail across her shoulder and faeces in her fringe.

There’s no awkwardness sharing eye-contact whilst breastfeeding. No red-faced husbands making excuses to hide in the bathroom for half an hour at the mere hint of an areola.

You both know the offer of a cuppa means ‘I might get round to making a pot in the next hour… so how about we cut the crap and you gin-up those hobnobs’.

There’s the mutual understanding; she tells you how incredibly well-behaved your toddler is, as they rip a section of curtain down to fashion into a war-bandana, and repeatedly attempt to eat her baby. You pretend not to be jealous of her stationary, gurgling little bundle who simply smiles, shits and sleeps… and don’t bother patronising her with ‘you wait until…’ and ‘they grow so fast… blah, blah, blah’ comments…

You can sit and judge other mums together, safe in the knowledge that your children are [email protected]*king perfect. As are you. And incredibly thin. And beautiful. Facts you continually remind each other of…
There’s the unspoken mutual appreciation of the fact you both managed to put mascara on this morning. On both eyes and everything.

And together, there is no buggy you can’t identify… no matter how far away. #Proud.

And there is gin. 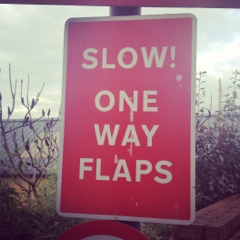