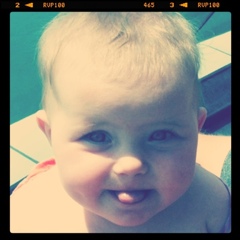 Whilst attending our road’s Diamond Jubilee street party earlier today, my daughter decided to publicly demonstrate her distain at being dressed in head-to-toe Union Jack with matching hat.

To ensure we all knew just how displeased she truly was, she pushed out a poo of truly epic proportions which managed to breach both the leg and waist nappy borders simultaneously meaning she literally had a shit on our country’s flag on the anniversary of our monarch’s coronation. Some of the older folk in close proximity looked at me as if we had literally committed treason.

We sat inside defacing stamps instead.