Tomorrow I turn 18 months old, and to date you’ve managed to not to kill or seriously damage either of us, which is both admirable and fairly surprising… So well done. I’m making you a medal out of raw pasta, toothpaste and Calpol syringes later which I’ll have delivered to you in bed via one of the cats.

Anyway, I digress. To mark the momentous occasion of my one and a half years on this earth, I thought firstly I’d allow you to buy me stuff. And secondly write down some pointers to make the journey to my second birthday a little smoother for us all. So here goes:

I think we’ve clearly established we don’t really need Daddy. He’s pretty good at tummy tickling and shoulder rides, but I’ve been doubting his commitment lately. Ever since this ‘new job’, whatever that is, he’s been slacking… so I think it’s time to cut the dead wood.
I’ve said this before, but I don’t think you took me seriously so once again… I. ONLY. EAT. YOGHURT. And anything you’re eating.
And if you try hiding peas in my omelettes again I’ll have your skin removed and made into a coat.
I shan’t be needing my highchair any longer. I’ll take my refreshments on Colin the Rocking Snail thank you.
I should like to move around the house via the medium of dance from now on. Or riding a cat.
I’ll be needing all the iPhones and remotes.
I’d like to remain naked until October.
Except for my shoes. I’ll wear my shoes. And your shoes too. All the shoes are mine now.
From now on I shall only be pushing the buggy. Not sitting in it.
And while we’re at it you know my reins… well, you’ll be wearing them from now on. Let’s see how you enjoy being led around like a monkey on a lead… NOW DANCE FOR ME MONKEY. DANCE. And fetch me a yoghurt.
Next time we go to soft play. We won’t be leaving. EVER. Try to remove me, and I’ll lick the giant lego. And none of us want that to happen… again.
You know that arranging into different boxes thing you did with all my toys? Well – don’t do that again. It made me angry. And when I’m angry, I shit on your toothbrush.
Oh, and you won’t be taking toilet breaks any longer…
Or eating anything which I haven’t first tasted to decide whether I should have it instead…
In fact you won’t be going ANYWHERE without me again. EVER. Remember, I have all your shoes.
Oh and while I think of it: when I die I wish to be buried with Charlie, Lola, the cats, some yoghurt, my toothbrush and your car keys.

Any questions BBM me, yeah. 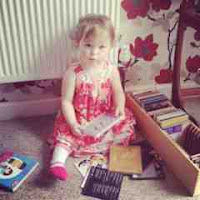